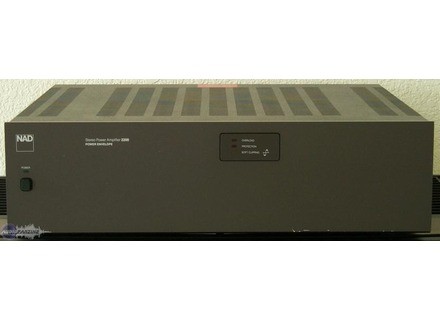 Reproducing musical signals, the NAD 2200 routinely delivers over 500 watts per channel into typical
loudspeaker impedances.
In actual measurement with speakers of complex impedance and lower-than-average sensitivity, the
2200 produces peak sound pressure levels exceeding 115 dB SPL(Sound Pressure Level) in a medium to
large room, with no audible or measurable distortion.
But in size, heat dissipation, and cost, the NAD 2200 is similar to many other amplifiers rated at only
100 watts per channel. For audiophiles who can use and appreciate its capability, the 2200 is
unquestionably the best-buy power amplifier ever manufactured.
The Key: Real-World Design
Examined from one perspective, the 2200 is a very conservatively rated 100 watts/channel power
amplifier that has an extraordinary +6 dB of dynamic headroom, meaning that it can produce more than
four times its rated power during musical transients.
Looked at another way, the 2200 is a super-amplifier that produces between 400 and 800 watts per
channel for music (depending on speaker impedance), but contains an “intelligent” power supply that
gives it the modest size, heat dissipation, and cost of a conventional 100 W/ch amplifier.
The key to the design of the 2200, as with all NAD amplifiers, is that its design goes beyond
conventional specifications and laboratory tests to provide optimum performance under the conditions
of everyday use, NAD amplifiers are designed, first and foremost, to reproduce the dynamically varying
waveforms of music-not just sine-wave test tones. They are designed to deliver undistorted power to
loudspeakers of any impedance-not just to an 8-ohm test resistor. NAD’s engineers have always
recognised the importance of supplying high levels of output current to drive the low and complex
impedances of real loudspeakers. NAD premiered the use of Soft Clipping™ in solid-state amplifiers to
prevent harsh distortion when the demands of the musical signal exceed the amplifier’s limit. All NAD
amplifiers feature high dynamic headroom for the transient sounds in music.
The NAD 2200 is a truly “dynamic” power amplifier. Its heart is the unique PowerTracker control circuit
(patent pending), which automatically adjusts the amplifier’s maximum power output according to the
dynamic character of the signal that is being amplified. As befits a product designed for the
reproduction of music, the NAD 2200 achieves its maximum power output of 400 to 800 watts per
channel when amplifying wide-range musical signals that contain peaks IO to 20 dB above the average
level. But when the amplifier is fed a high and constant signal (i.e. a sine-wave test tone instead of a
musical waveform), its maximum output automatically declines to avoid overheating, and eventually
levels out between 100 and 200 watts per channel.