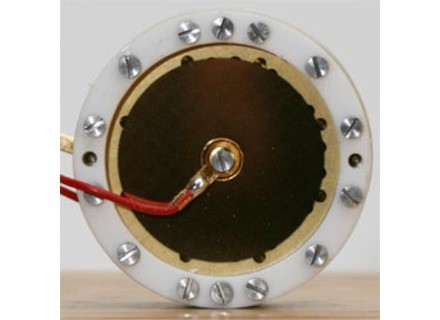 The capsule in two of Neumann’s most famous microphones, the U67 tube microphone and U87 solid-state microphone, is a dual-backplate design called the K67.

This is the most-copied capsule design in the world. And yet the vast majority of the copies, especially the inexpensive imported ones, are different from the original in one critical respect: they are the wrong size.

The RK-67 is a very close copy of Neumann’s original. It is a true 34mm, dual-backplate capsule manufactured to very high tolerances.

It is a dual-diaphragm capsule; both are made of 6-micron Mylar, coated with gold. For use in a Cardioid microphone, simply connect the front diaphragm to the circuit. For multipattern operation, connect both front and rear diaphragms.

We have selected the RK-67 to meet stringent performance specifications: the front and rear sides of the capsule match to within 0.5dB in sensitivity and frequency response. This ensures the most honest performance in Omni and Figure-8 patterns.