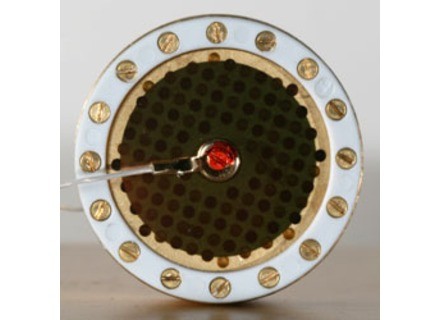 The original U87(i) FET condenser used a capsule known as the K87. It was acoustically identical to the K67 capsule (used in the U67 tube microphone), but used an insulating shim between the two backplates to isolate the two capsule halves. This capsule connects to the U87 circuit via four wires — one to each of two diaphragms, and one to each of two backplates.

The U87 (non-A revision) had no voltage multiplier, and required a 4-wire capsule in order to create the Figure-8 polar pattern. If you are building a microphone based on the original U87, you need a 4-wire capsule for multipattern operation. (If you want to build a Cardioid-only microphone, you could use a 4-wire RK-87 or a 3-wire RK-67.)

Like the Neumann K67/K87, the RK-87 is a true 34mm, dual-backplate capsule manufactured to very high tolerances. The two backplates are electrically insulated from one another, necessitating the use of four wires for multipattern operation.

It is a dual-diaphragm capsule, with membranes made of 3-micron Mylar, metallized with gold. For use in a Cardioid microphone, simply connect the front diaphragm and front backplate to the circuit. For multipattern operation, connect both front and rear diaphragms, and both backplates. For use in a multipattern 3-wire environment, simply ground the front and rear backplates together.

We have selected the RK-87 to meet stringent performance specifications: the front and rear sides of the capsule match to within 0.3dB in sensitivity, and ±1.5dB in frequency response. This ensures the most honest performance in Omni and Figure-8 patterns.