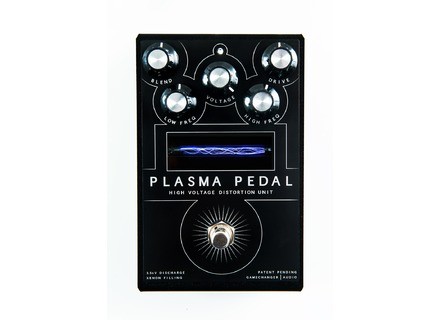 The PLASMA PEDAL is a revolutionary approach within the realm of overdrive and distortion, as it is a new and previously unexplored method of achieving signal clipping. Instead of using LED circuits, transistors or vacuum tubes to produce overdrive, the PLASMA PEDAL transforms your instrument’s live signal into a series of continuous high-voltage discharges within a xenon-filled tube.

In essence – you are playing a bolt of electricity, and the electrical discharges produced by your instrument are instantly converted back into an analog audio signal, producing a quick, responsive, and extremely heavy distortion with TONS of unique character!

By maxing out the BLEND knob you can achieve a fully wet signal, produced only by the gas-discharge tube. This means that as soon as you stop playing,  the electrical discharge within the gas-filled tube is interrupted,  and the pedal will not produce any output signal at all.  This feature allows you to achieve extreme contrasts between individual notes, by eliminating all of the in-between noises created by the intsrument’s pick-ups or by humming strings.
Thanks to this, PLASMA PEDAL is extremely well suited for playing heavy riffs or sharp staccato solos. Really – there’s nothing like it!

PLASMA PEDAL converts your instrument’s signal into a rapid series of electric discharges, which results in a large amount of non-linear harmonic saturation that causes extremely rich and responsive attacks, and brings out screechingly sharp overtones and harmonics.
These harmonic artifacts, produced as a byproduct of the high-voltage discharge are uncommon in traditional signal amplification, and therefore PLASMA Pedal’s distortion is unlike anything you have heard before.

PLASMA PEDAL is designed primarily for guitarists, but it is also an awesome distortion tool for all sorts of electronic beats, synths and live instrument samples.
As you max up the VOLTAGE knob, you can add satisfying amounts of electrical buzz to any sound…
Masquer les caractéristiques