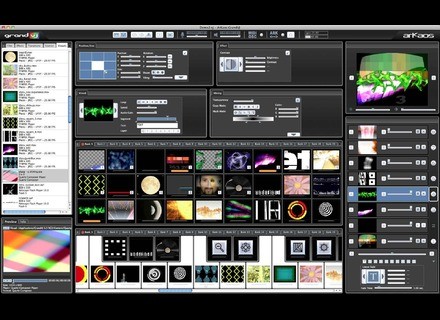 ArKaos, the world-leading provider of technology for live visual performances, is pleased to announce the release of GrandVJ 1.5, which includes major new features and enhancements.

GrandVJ is a real-time video mixer software allowing VJs to compose up to eight layers of Video on the fly, it is the tool of choice for live audio visual performance, the best solution for VJs, DJs, clubs and musicians.

The new GrandVJ 1.5 brings video mixing to the next level with the addition of two major new features: Transitions and ArKaos Connect VST plus several other great enhancements!

With the addition of 37 transitions, it’s even more fun to mix with GrandVJ 1.5!

ArKaos Connect VST: the missing link between Musicians and VJs

GrandVJ accepts all common video and image formats. Its intuitive interface lets you turn your keyboard into a super controller for zipping through the functions.

GrandVJ is very easy to customize to each user's preferred setup. The interface can quickly be modified to fit individual needs and preferences.

Behind the scenes, GrandVJ speeds up with a state-of-the-art multi-threaded hardware-accelerated graphics engine that benefits from ArKaos experience of more than 10 years in live visual processing software development.

It can play video at up to 60FPS without dropping a single frame thanks to Software Genlocking and supports Frame Blending and Soft-Edge without any compromise on output quality or software stability.

Grand VJ has been developed, tested and refined to get the best possible performance out of any modern computer or laptop, and just like all other ArKaos products, GrandVJ runs on both PC and Mac.

Founded in 1996, ArKaos started as a software company but today it also develops the ArKaos A10, a unique hardware media server that delivers an unrivalled performance in speed, effects and manipulation of simultaneous high-definition video streams.