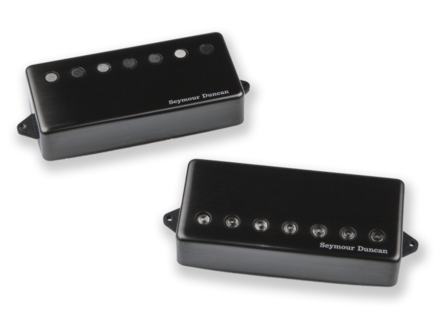 Made exclusively for Jeff Loomis, this active 7-string neck humbucker is designed for detail, clarity and sustain.

When Jeff Loomis switches to his neck pickup for a solo, he requires clarity and detail to accurately translate his fast picking style, but also enough sustain to keep up with his legato techniques and enough dynamic range to play clean. His 7-string neck pickup achieves this with Alnico 5 rod magnets for each pole, providing single coil-like clarity with a slight bump in the treble frequencies and a focused low-end response to keep low notes from sounding too boomy. The overall feel is inspired by passive humbuckers but with the power, headroom and super-low noise of actives.

Jeff tested these pickups extensively around the world on tour with Arch Enemy, resulting in the 7-string version of his neck pickup being carefully calibrated to cope with the extended range of his signature Schecter guitars.