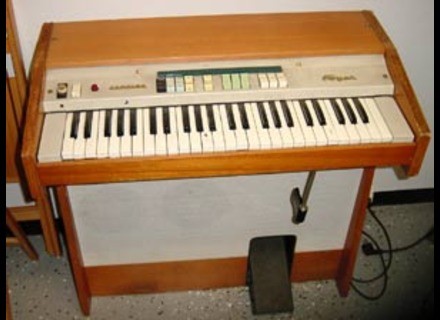 The Foyer appears to be a basic Mini-Compact, built into a spinet cabinet, with amp and speakers. - look at the panel - it's pretty much identical to the Mini. Click on the picture below to go to a web site with much more information. It's got Reverb, but is missing the Vibrato Heavy/Light tab (like the Mini-Deluxe), and does not have the selectable octave of grey keys. Instead, it has a "Chords" tab. I'll let Jonas Petrini explain:
"The chords tab is for a separate box that mounts on the far left side of the keyboard. (that's what the two holes are there for) With the chords tab on, the first octave becomes single tones. this is for the chord box that mounts on top. when pressing a button (ie. Ab or G#) on the chord box, two or more keys are pressed thus producing a minor or major chord. Kinda like an accordion I guess"
"The black "chords" tab is for making the lowest octave of the keyboard play single bass notes instead of the combination of 16' 8' 4' ́ and vibrato settings you've skillfully applied. The thing is though, that it won't play the 16' plays 8' !!! so if you only have 16' on and "chords" on, you will get two octaves of identical notes (same octave)."