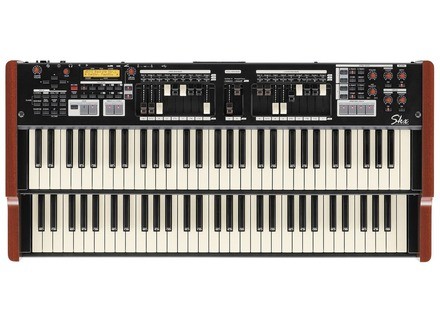 The Professional Organist desires an independent set of DRAWBARS for each Manual as well as the Pedal clavier, The SKX offers exactly that: REAL Drawbars in the style and operation of every classic HAMMOND ORGAN, allow you to register each manual and the pedal in the traditional manner.

The SKX features TWO independent EXTRA VOICE Divisions, allowing you to layer different voices on one Manual, or assign a different voice to either Manual. You may also combine the EXTRA VOICES with the Tonewheel, Transistor or Pipe Organ voices. Balance between the chosen EXTRA VOICES is easily controlled with a dedicated MIX/BALANCE knob.

EASY TO PLAY, READY FOR THE STAGE
The SKX is designed for smooth use onstage and off. Define your 10 most-used patches from the 100 “User” and 100 “Factory” patches and assign them to the 10 “Favorite” quick-recall buttons on the SKX control panel. Adding even more versatility, there are now 10 “banks” of “Favorites” available for instant recall. The New SKX also has an expanded EXTRA VOICE LIBRARY storage memory, allowing you to load in more voices downloaded from the HAMMOND website than previous models.

THE VINTAGE SOUND, WITH NO MOVING PARTS

The SKX’s authentic HAMMOND tone is produced by a “Virtual Tonewheel” Generator closely following Mr. Hammond’s original design, but executing it in the Digital Realm, without moving parts. This provides all the characteristics, and yes, all the imperfections that have come to define the classic HAMMOND sound. “Out of the box” the SKX is set to the same factory tolerances a B-3 was set to during its production run, but the Digital control allows you to tailor nearly every aspect of the tone to your personal taste. Our Wave Composition™ system adds the popular “Transistor Combo Organ” Voices, which you can register in the original fashion, plus 32 ranks of High-Definition Digital Classic Pipe Organ Voices. The SKX is perfectly at home in all types of music, from Blues to Rock to Jazz and Sacred, and all points in-between.

PERCUSSION
Hammond’s exclusive Touch-Response Percussion™ as found on vintage Hammonds is included, and its parameters are user-tweakable.

CHORUS-VIBRATO
As the Virtual Tonewheel Generator provides tonal accuracy, the classic “Mechanical Scanner” is precisely Digitally-Modeled, providing the timeless Hammond Chorus-Vibrato effect. The effect may be applied independently to each Manual, and again, nearly every aspect of the effect can be tailored to your taste, including the characteristics relating to “age and wear” so desired by discerning players.

LESLIE™
77 years of building Don Leslie’s Masterpiece has given us the edge in developing its 21st Century Digital Edition. The HAMMOND’S essential partner is yours at every moment, with 8 factory profiles of the most famous Leslie models (122, 147, et. al.), and 8 User-definable profiles allowing you to tailor the response matching the Hammond you create with its perfect mate. The accuracy of sound is remarkable. Of course, should you wish to hook up a physical Leslie Cabinet, the traditional 11-pin jack is located on the rear panel, and the onboard controls (including the optional CU-1 “half moon” switch) perform exactly as you expect.

THE EXTRA VOICE DIVISION
The inclusion of Hi-Definition Acoustic and Electric Pianos, Clav, Bass, and Accordion voices compliment the Organ tones, and create in the SKX a comprehensive foundation keyboard, the backbone of any serious keyboard rig. The SKX’s keying system replicates the feel of a weighted keyboard when playing piano-type voices, yet remains supple and responsive to every Hammond Organ technique. Stepping further, the most-wanted Orchestral Voices-Strings, Woodwinds and Brass are represented, many featuring Hammond’s exclusive ProChord™, which brings complex voicing to single key play based on the chords YOU provide. An extensive Library of elective EXTRA VOICES is available without charge from www.hammondorganco.com, to expand the SKX in directions YOU choose.

PERFORMANCE OPERATIONS
• OCTAVE
Digital Control allows flexibility of performance a Vintage Hammond is incapable of. You may independently raise or lower the Upper and Lower Manual’s range by one octave, allowing greater comfort of playing.

• PEDAL SUSTAIN
A popular option for playing the Pedals or Manual Bass is Pedal Sustain, which allows the Pedal voice to smoothly decay upon release, much in the manner of a string bass.

• MANUAL BASS
Allows the PEDAL part to be played on the LOWER manual of the SKX.
You can choose from 3 modes,: Lowest played note only / Chord / Root notes as discriminated by chord played.

• LOWER to PEDAL
Couples the LOWER manual registration to the PEDAL Part.

• TRANSPOSE
Allows you to shift the entire pitch of the keyboard to match singers, soloists and the other instruments, or to simplify key changes.

• PROCHORD
Certain Extra Voice instruments are enhanced with the ProChord™ function. This allows complex voicings to be played with one finger, based on chords played on the lower manual. 26 distinct chords are “parsed” by the ProChord™ function, with proper passing tones provided to insure proper enharmonic continuity.
• MIDI MASTER KEYBOARD
External Zones are available to enable the SKX to be used as a MIDI master keyboard. 3 on the Upper Keyboard, 2 on the Lower Keyboard, and 1 on the Pedal Clavier.

• USB TYPE “A” PORT
A USB Type “A” port is included, intended for saving/loading setups, system updates, downloaded Extra Voice libraries, and the music player. The Music Player allows WAV/MP3 audio files to be controlled and played through the SKX Audio Outputs.

• LESLIE 11-PIN JACK
A standard 11-pin Leslie jack is included on the rear panel. Attaching a Leslie here disables the Digital Leslie effect from the output, and allows the Leslie Cabinet to respond to the onboard Leslie Controls. If the attached Leslie is a 1-channel Model, the EXTRAVOICE Division remains at the LINE OUT Jacks. (requiring an additional non-rotary keyboard amplifier such as the Leslie Model LS2215 or LS2012)