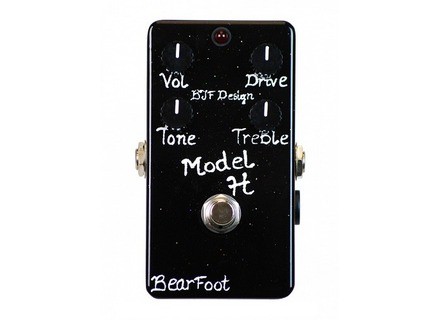 BearFoot is a collaboration between BJFelectronics and  DonnerBox to produce some of Bjorn Juhls best designs. These guys really need no introduction, Bjorn Juhl has been building amazing pedals for  years and Donnerbox has been around for a long time creating funky  boxes. The news of these guys teaming up to recreate the amazing BJFE  pedals, at a lower price and in bigger numbers, got the anticipation  levels of many pedal lovers WAY up. I got 3 more pedals from them to try out, each one a different take on one of the pedals I tried before. So  let's look at the 4-knob version of the Model H! The 3-knob version came in a great  looking paintjob and the 4-knob version is no different. This one has a  nice sparkle finish.Like the 3K-version, we have volume and drive and  that interesting 3 rd control. Not just an EQ but it also changes the  head room and the feel of the pedal. The 4 th control is a treble  control that lets you dial in the amount of treble on top of the EQ you  have set. Like the Dyna Red, this pedal can be run at alternative  voltages, anything between 8v and 12v works!

The pedal in use

The original Model H really surprised me. I didn't know what to expect from "pissed-of-Hiwatt" tones but I really liked what I got out of the  pedal. To be honest, I did not feel the need for the extra treble  control because the 3K-version really fitted the rig I was testing it  with. I can understand why some would like the additional control.

I tried the 4K-version with different amps and guitars and it's still  able of delivering really great rock tones. There was something about it though. Somehow, I never felt that the 4K-version nailed the tones like the 3K-version did. It wasn't just a tonal thing but also the feel  seemed slightly different. Don't get me wrong, this is still a kick ass  rocking pedal. I did find the treble control very useful when swapping  between a telecaster and a big fat sounding ES335. It's nice to dial up a bit more treble to fit the ES335-tones.

The original recipe  nailed the dish IMHO and the changes on the 4K-version make this pedal  just fall short of the original. If I had never heard the 3K-version, I  would still have absolutely loved the Model H. It's still a kick-ass  pedal and I absolutely loved rocking out with it. I love that it retains the character of your guitar, is responsive to your playing, yet holds  its own tone regardless of the amp you plug it in. It has its own sonic  footprint and I happen to love that footprint. The 4K wasn't a  disappointment but merely proof for me that I should be getting the  Model H 3K. I held off getting one because I knew about the 4K-version,  now I know the 3K is the one to get.