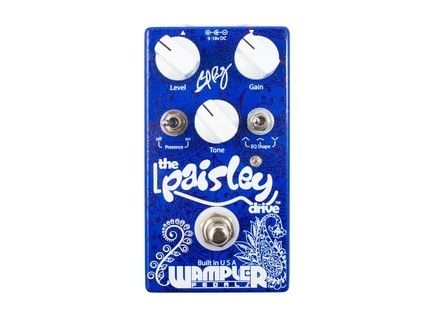 2016 Updates: Relay true bypass switching from the older mechanical type that will improve reliability greatly.   In addition, we have also moved the jacks to the front of the pedal which will improve pedalboard real estate. The paisley drive toggle switches have been oriented left to right instead of top to bottom as well.

The in-built tonal controls, the presence and mid contour switches, will make this pedal the single most versatile and complete overdrive pedal you have ever owned. In fact, we believe it might be the last one you ever buy…

Since late 2009, we discovered that Brad Paisley was using Wampler Pedals. He started with the Faux AnalogEcho, then got an Ego Compressor and then had the Underdog overdrive.

Everything was great until his tech at the time, Chad, mentioned to Brian that Paisley still was not quite settled on the overdrive sound he was getting from his live rig… could Wampler maybe look at making a pedal …??

Paisley’s requirements were quite “simple”… it needs to be clean but get crunchy with some “beef” to it. It needs to have a fluid tone when soloing. It needs to add a little hair to the tone but then but then has to be able to give flat out ball busting gain, oh… but please do not wreck the tonality. It needs to have everything, in a pedal format, but do not make it sound like a pedal…!

Over a period of months, Brian made some circuits and sent them off, there were a couple of “tweaks” here and there to be made and then finally, when official “prototype #2” landed it went straight into the live rack and out on the H20 world tour.

The truly great thing about this pedal is that it’s not only Telecaster style guitars that it works so well with, it brings the best out of your Strat or anything you may have loaded with humbuckers. You no longer need to have individual pedals for your guitars; the Paisley Drive will make each one sing.