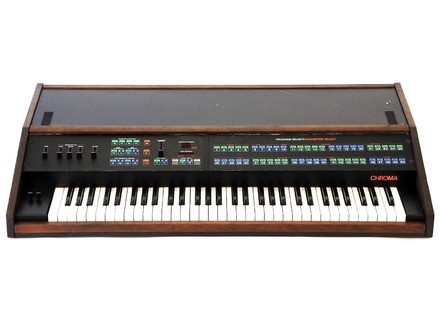 The ARP Chroma is a model of polyphonic synthesizer developed in 1981 by ARP Instruments, Inc. just before that company's bankruptcy and collapse. The design was eventually released by Fender as the Rhodes Chroma, and was one of the early microprocessor-based Analog synthesizers. It was not the first commercial synth with a touch-sensitive keyboard, using 64 weighted wooden keys; some units also included a polyphonic pressure sensor under the keys. The synthesizer had 16 channels normally used in pairs for 8-note polyphony. It was controlled via a panel consisting of multi-purpose touch switches for selecting sounds or parameters of sound with a single slider for adjusting parameters. This approach was later copied by many more successful synths, such as the Yamaha DX-7. The main microprocessor was a 68B09, and it had a computer interface consisting of a 25-pin D-sub connector – this was before the invention of MIDI). An Apple IIe interface card with sequencing software was released later on. Eventually, a third party came out with a Chroma-to-MIDI converter box. Fender also released a keyboardless version called the Chroma Expander, which could be slaved to the Chroma via its computer interface.