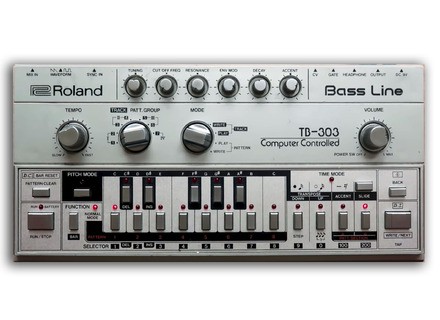 The TB-303 has a single audio oscillator, which may be configured to produce either a sawtooth wave or a square wave. The square wave is derived from the sawtooth waveform using a simple, single-transistor waveshaping circuit. This produces a sound that is subtly different from the square waveform created by the dedicated hardware found in most analog synthesizers. It also includes a simple envelope generator, with a decay control only. A lowpass filter is also included, with -24dB per octave attenuation, and controls for cutoff frequency, resonance, and envelope modulation parameters. It is a common misconception that the filter is a 3 pole 18dB per octave design when in fact it is 4-pole 24dB per octave.

The TB-303 sequencer has some unique features that contribute to its characteristic sound. During the programming of a sequence, the user can determine whether a note should be accented, and whether it should employ portamento, a smooth transition to the following note. The portamento circuitry employs a fixed slide time, meaning that whatever the interval between notes, the time taken to reach the correct pitch is always the same. The accent circuitry, as well as increasing the amplitude of a note, also emphasizes the EG filter's cutoff and resonance, resulting in a distinctive, hollow "wow" sound at higher resonance settings. Roland referred to this as "gimmick" circuitry.

The instrument also features a 'simple' step-time method for entering note data into the 16-step programmable sequencer. This was notoriously difficult to use, and would often result in entering a different sequence than the one that had been intended. Some users also take advantage of a low voltage failure mode, wherein patterns that are programmed in memory get completely scrambled if the batteries are removed for a time.