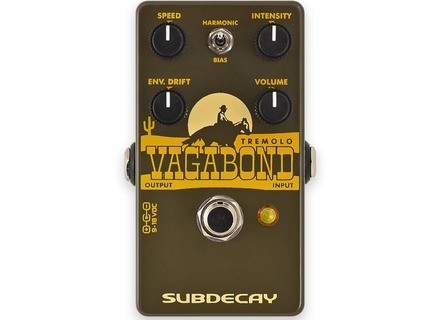 The Vagabond Tremolo embellishes upon one of the most tried and true effects of all time. Tremolo with vintage personality fused with added depth, more speed and more control.

In the simplest terms tremolo modulates volume. This definition doesn’t exude the inflection of wah, the blunt weaponry of fuzz, or the obvious psychedelic ramifications of echo. In spite of the boring definition, tremolo is a defining sound of so many classic songs and artists. Like many other things in music the early classic designs were imperfect, and those imperfections made them what they were. It made them interesting.

Bias Tremolos, like some Fender black face amps create subtle distortions and alter frequency response. Harmonic tremolos, like the older brown face amps weren’t really tremolo at all. They were cross fade effects between high and low-pass filters. Because of the phase shift in the filters, they often have subtle hints of phaser or vibrato.

Both of these tremolo styles use a large bias voltage added to your guitar signal to modulate the volume. (bias tremolos in the power amp and harmonic tremolos in the preamp) The only reason that you don’t hear this added signal is because the LFO is below frequencies our ears can hear. In fact, if you take the grill cloth off the amp you’ll see the speaker moving in rhythm with the effect.

This creates some limitations in these types of effects. If the LFO went any faster you’d hear low frequency hum. If you’ve used bias tremolo before you’ve surely noticed that some sound is always audible. The volume never completely turns to zero. If it went any deeper you’d hear a popping sound as tubes turn completely off.

Tube amp LFOs also had a limited range. Most tube amp LFOs use a phase shift oscillator employing a single triode. This setup doesn’t work over a large frequency range. It can be extended with triode stages and a multigang potentiometer, but this was a time when tubes were at a premium and everything was wired by hand. Most amp companies would opt for simple rather than anything seeming unnecessarily or complicated.

We’ve built a name for ourselves in modulation effects, but tremolo has been notably absent from our effects lineup. This wasn’t for the lack of trying. We went down that rabbit hole many times. Attempting to pair the effect with DLX pedal controls schemes was a common theme. After a while the extra features felt unnecessary. We’d end up bypassing the effect and using the tremolo on the Princeton Reverb we test all new ideas on.

We added the one interesting feature from our tremolo experiments with the Prometheus DLX control scheme: Envelope speed control.
We included a volume control so you there’s no need to worry about the inherent perceived volume loss with tremolos.
Broad modulation range range, going faster and deeper than a tube based circuit ever could. The Vagabond gets near square wave modulation with the maximum intensity setting, and in bias mode cuts the volume down to zero for maximum throb.

While the Vagabond is the first Subdecay tremolo it has been developed through experimentation and exploration of ideas over many years. This time we are excited. We think you will be too!