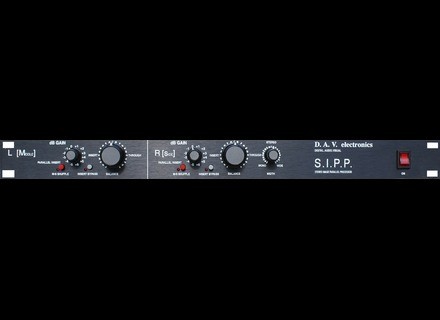 Using the M-S function you can increase or decrease the stereo width of a track (using the control on the front panel, marked width). Using the insert points, you can EQ/compress/de-ess the sides or middle of a track. As a tool it has endless uses in creating your stereo image when mixing and mastering.

The SIPP allows the engineer to use outboard processors in ‘parallel’ by allowing any desired mix of wet and dry paths using a continuously variable blend control. The source is fed to a single input and then split into two: The dry path represents the original source which can then be blended with the with the ‘wet’ path which consists of the same source routed to a balanced insert point. The user can connect any piece of outboard, or indeed pieces of outboard to the wet path to achieve a variety of effects.

The most common application for this technique is in the implementation of ‘parallel compression’. This technique allows low-level parts of a signal to be brought up, while retaining the transients in the source. It works particularly well on drums and vocals as well as across the mix in both mixing and mastering applications.

Other common uses include distortion as a parallel effect but in fact any process could prove to be creatively useful.