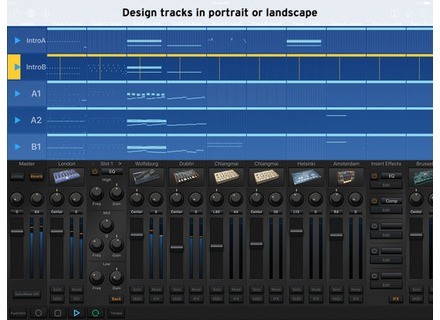 • A collection of more than twenty Gadgets
Each Gadget available contains carefully constructed parameters to bring you the sounds you want. They’re ideal for producing all forms of electronic music. Even inexperienced musicians can enjoy the app as each synth offers a Scale function that makes it virtually impossible to play the wrong notes.

• Design tracks in portrait or landscape. Workflow for any music production task
The greatest feature of KORG Gadget is the user interface. It gives you an ideal music production workflow based mainly on the portrait orientation that you're familiar with. When you want to focus on specifics, you can smoothly switch to landscape orientation. This app perfectly supports either preference on the iPad, iPhone, or iPad Pro. From song production to sound design, effects, and mixing, all the steps are intuitive and seamless. Experience perfect music production on mobile!

• Produce music more freely without location limitations. An ideal choice as a second DAW
If you run out of ideas while producing a song, try taking KORG Gadget somewhere that you find inspirational. Gadget liberates you from limitations of location, allowing you to create and capture song ideas anywhere. These ideas can be saved as MIDI or as audio to allow a smooth transition to your desktop system. Wherever you go, take Gadget along as the ideal partner for inspiration.

• Share songs to the GadgetCloud to connect with users around the world
Songs that you create using KORG Gadget can be shared on “GadgetCloud,” a music exchange for Gadget users worldwide. By uploading and sharing songs, you can communicate in ways that bypass language barriers, and also improve your skill as a creative artist. On GadgetCloud, you can submit your songs for selection as tracks recommended by Korg, enter various contents, and use the ranking system. You can also upload from Gadget directly to any social networking service such as SoundCloud, Facebook, or Twitter, to name a few.
* GadgetCloud is based on SoundCloud, the cloud service that's supported by creative artists world-wide.

• Make it come alive with new MIDI controllers. Accelerate the pace of your music production
To customize your needs, you can freely choose a MIDI controller that complements the KORG Gadget. With the nanoKEY Studio/nanoKONTROL Studio, you can step-record and mix wirelessly as setup is automatic, making this easy and convenient. You can also opt to choose the microKEY Air, a compact mini-keyboard that can also connect wirelessly and via the Apple Lightning adapter. By partnering with a MIDI controller that inspires you, you can improve the quality of your music production.