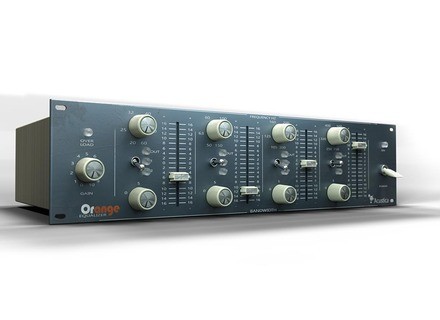 Overview:
The Orange Eq is inspired by the sound of a much sought-after American equalizer used in the 1980’s in nearly all areas of audio: audio amplification, recording studio, broadcasting, disco, theatre. The name itself has been thoughtfully chosen and subtly refers to the original name of this famous equalizer – just to pique the curiosity of those who are familiar with the field, we leave it up to your imagination and knowledge…
A stand-out difference is that, instead of having 8 bands, the Orange Eq is a single-channel four-band quasi-parametric equalizer with the convenience of graphic-type Eq controls providing up to 16dB of boost or cut. The quasi-parametric technique was adopted because it allows to deliver a top-notch sound quality without compromising distortion, noise, accuracy and reliability.
This is the first new product entirely developed by Acustica Audio, characterized by an improved quality and based on a sampling technique with Prism Sound converters.
This powerful tool is designed to provide the quality and performance required by professionals, and also the versatility needed by advanced audiophiles. The sound quality of the Orange EQ is crisp and clean, and does not affect the sound beyond your expectations, but you can even give it a radically different “colour” from the original.
It is suitable for all types of instruments: electric and acoustic guitars, bass guitars, keyboards, snare drums, and both leading and backing vocals. All in all, it is a perfect tool for fine-tuning a signal for recording and mixing.

For a limited period of one month, a payback policy is being adopted allowing our customers to receive a discount coupon to be applied to their next purchase. Moreover, although the product’s price is already reduced by €10, the payback value equals the product’s total value.