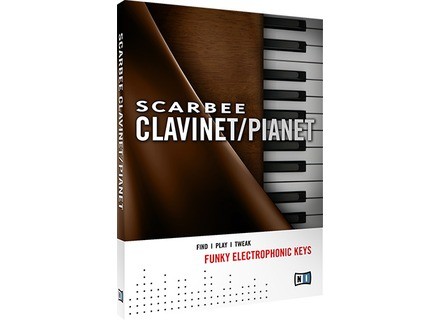 12,300 samples - with every note recorded in each of the four standard pickup settings in both a standard version and a version with the mutebar engaged. The PIANET is smaller in size due to the simple mechanical design of the instrument which makes 5 release samples per key more than enough to obtain a perfect simulation of the original keyboard. Both models incorporate Scarbee's Horizontal Release Technology for instruments that are as wonderfully realistic as they are playable.

Horizontal Release Technology is the process by which release samples are chosen from a wave pool depending on how long a key has been held - allowing a note played staccato to create a release tone different from a note which is sustained for a longer period.

The CLAVINET makes use of advanced triggering options which allow the inclusion of the occasional 'off center' string strike, a well-known characteristic of the original instrument. Sampled, mapped and programmed with great love and lavish attention to detail SCARBEE CLAVINET/PIANET presents both classic electro mechanical instruments in their ultimate form.