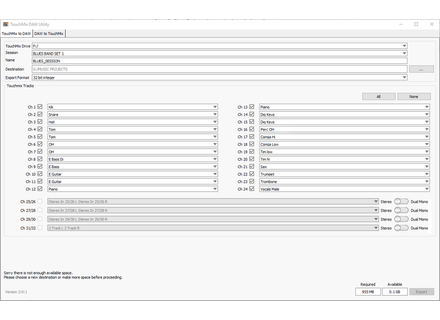 Version 2.0 offers this capability to users of all three models of TouchMix digital mixers, including the TouchMix-30 Pro.

The DAW Utility will copy tracks recorded on a TouchMix mixer and place them into a single directory (folder) to facilitate fast and easy importation into most DAW software. It can also convert the files to a lower bit-depth to accommodate DAW software that doesn’t accept 32-bit floating point wave files. In addition, it offers the option of importing TouchMix stereo channels as stereo or individual mono waves.

The DAW Utility lets the user assign wave files to TouchMix channels and copy the files with the proper directory structure and header files to be played as a TouchMix Session. In order for recorded tracks to play back on TouchMix they must be in the 32-bit floating point format, be stored in to the correct file structure and have the right XML header file. The TouchMix DAW Utility converts and saves your DAW tracks in the proper structure. Simply locate the DAW files you want to play on TouchMix and select the TouchMix channels you want the tracks to play on.