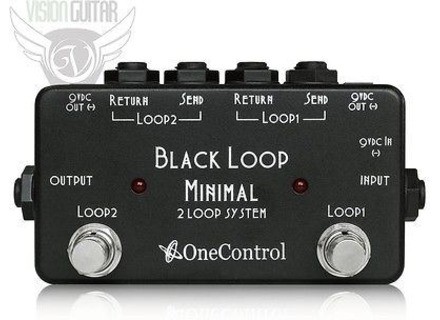 The BLACK LOOP is a 2 Loop true bypass switcher with two DC outs. While using the DC Input the two DC outs can be used. While pedals are connected to Loop 1 or Loop 2 they can be simultaneously powered and bypassed by using the Black Loop's true by-pass capabilities. Players can connect multiple pedals into each loop to create two independent effect chains. The Black Loop is a great solution for bypassing vintage effect while not in use. The Black Loop has several uses depending on how you connect it.

The Black Loop is a great value. The several features that the Black Loop provides makes it an extremely useful item for any guitarist to have. In addition to being a true bypass looper, the Black loop can be used as an AB Box. Simply attach one amp to the OUTPUT and the other amp to SEND 2. Stepping on the LOOP 2 switch will toggle between SEND 2 and the OUTPUT. If you choose to use the Black Loop in this manner, stepping on LOOP 1's switch will act as a mute switch. If nothing is connected to SEND 1 or SEND 2, either of the two can be used as mute switches however if you attach your tuner to SEND 1 or SEND 2, you can create a tuner/mute switch with the Black Loop.